Its my 21st Birthday next week.

Naturally, this week was my pre-21st celebrations with my circle of buddies because a few of them will be flying out to Swed-Land, a holiday which I could not really afford to go too :-(. I had a BBQ, and went to a Karaoke spot in Islington called "Lucky Voice". It was super super fun, and I highly recommend the place! Not only was there a sick selection of music (my favourites included: The Mamas and Papas - California Dreaming, The Eagles - Hotel California, Red Hot Chili Peppers - Don't Stop, Miami Sound Machine - Dr Beat and En Vogue - Don't Let Go), the interior was nicely decorated - not cheesy at all! It was around £15 a head, for three hours in a private room for 12, which I think is fairly reasonable, considering we got a free birthday bottle of champagne; albeit a cheap one ;-D!

My little sister made Coconut, Oreo and Peanut Butter cupcakes for me to stick candles in, candles which inevitably caused me to set my hair on fire. Oh yes, typical me. Forgetting how long my hair is and the distance between hair - and - lit candles. Even more typical, I did not even notice my hair was on fire...that was until my friends started attacking my chest in their attempt to put the fire out. I think I lost about 5 inches on my right side, don't worry I'm fine...and it really isn't that noticeable. Although, the singed ends are really getting on my wick, they look like super bad split ends!!! I went to my hairdressers today to get a much needed chop, only for them to turn me away as they were "closing"...went to a neighbouring Asian hairdressers who informs me my haircut will cost £28. I normally pay £20. Call my ass cheap but that extra £8 is a lot at this moment in time as my new job did not pay me, and will not pay me until the end of August. Tis sucks muchos bumbum.

Enough ranting and chit chat down to what I wore on my night! I wore BLACK. Me + Black = RARE. I went through the "I am a "cool" teenager and refuse to wear coloured clothes, the colour black and hard core music is my thannnggg" stage many years ago, and since then I hardly ever wear anything fully black. Went shopping for the dress, and believe me, shopping with a purpose is the worst type of shopping. This Zara piece was the best thing I saw...and it is not my usual style so I went for it. I wasn't 100% satisfied at the beginning, but I love it now. The grey and white hues on the dress reminds me of the shadows of the moon, which gives it a little extra zinggg ;-). Teamed with Ecote @ UO denim jacket, and my favourite "Coming to America" vintage Escada belt...copped from a women in NYC who was relentless in budging her prices.

Also wearing my fresh - to - death Jordan 1s which have LACE panelling! I am pretty much in love with these kicks, smooth as butter! For a better look check out Nitrolicious's Jordan 1 Lace post.

So, I just had a flick and update from Nitrolicious's blog...how sick and cool are these H&M booties?! You guys know that I am a strictly kicks chick, and it takes A LOT for me to get excited about shoes...but these are bad ass...I may need to cop *come autumn/winter*! 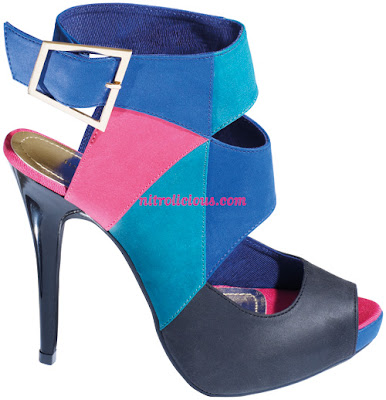 Also spotted in the latest issue of H&M's magazine a mesh panelled corset. £14.99? It is soo mine. I love H&M. Check out more from H&M's Party Collection on Nitrolicious's blog!

I have also fallen in love with the almighty Red Hot Chili Peppers again, the 40 tracks on my ipod have not stopped playing, "Strip My Mind" -

On a final note, I just want y'all to go check out my best friends travelogue blog! Its called JaJa in Wonderland, and it is updated weekly with her latest going on's in Nepal. I am sure she would update more if not for the lack of Internet access out there! She has currently been in Nepal for 1 week, and will be there for the next two months doing volunteering work with this scheme called "Platform2". This scheme gives 18-25 year olds the opportunity to visit developing countries to "get involved with global issues of Justice and poverty" *as quoted by JaJa*. I am well proud of my girl, because I know I will never be independent or brave enough to do what she is doing. Her travelogue is an interesting and very personal read, which is why I enjoy it so much. I hope you guys will too, be sure to show her some love and comment her posts :-D! Click here for JaJa in Wonderland, and I will leave you with a picture of the her and the Nepal landscape...

Those shoes are just awesome <3

i have missed you loverrrrrr!

Rachie, i have finally reached Blogspot hah, Happy Bday Matey, i started reading your blog, then realised i already know everything on the blog, u went kareoke without me ¬_¬

anyways we celebrate ur bday 2moz, will be livo

Wow! I never would have thought of pairing those shoes with that dress, and you make it work so well. I'm inspired!

Oh is that a birthday gift for you?Its very nice.

Those heels... Are out of this world, totally in love...

Thanks for hanging out on my blog...

I'll be following you