A star was born. And then fizzled out. Fast. 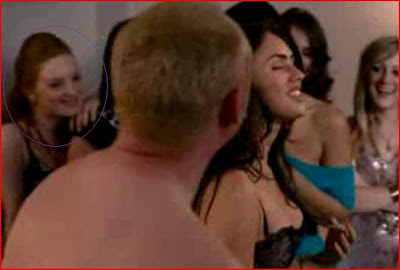 So in reply to commenters, if you have some free time you are willing to waste and never have back, and the eyes of a hawk, you can just about spot me from 01:31:00 Minutes here in How to Lose Friends and Alienate People (or as people in showbiz, like me, call it, HTLF). If you're lazy like me, there I am up there, right on the left edge of the screen by Simon Pegg (or as people in showbiz, like me, call him, Si), helpfully ringed in purple.

Being an extra (or as people in showbiz, like me, call it, a background artist) sounds glamourous and all, but actually it's just standing around in costume for 10 hours, redoing the same scene over and over and over again, from different angles. In my case, in 4 inch heels and a bouffant. Although I did get paid £160!

So you wanted to know how to be an extra? Well, I was kind of scouted outside Topshop in Oxford Street. As any hardened Londoner knows, there are always people 'scouting' outside Topshop there, waiting for unsuspected tourists to flatter out of some money. This particular women was telling me they were looking for people to be in a scene at a celebrity party or the Oscars or something. Obviously I was reluctant, but in the end, just to get her to leave me alone I agreed to let her take my picture. And then a few days later, to my utter shock they called me and asked me to come for a fitting in Brick Lane.
So I went along and waited while the girl in front of me moaned to the stylist about the clothes she was being made to wear (which I would of given my left hand for btw) and then was stuffed into a french connection dress which was then altered into an indecently short bubblehem, and a big leather belt that I later thought about stealing. I didn't!
I was also told my ears were too low to wear sunglasses. Thanks for that.
On shooting day it turned out that I was one of the very few that had been scouted and everyone else was either a (unfriendly) model or an aspiring actor/tress. This meant that I was possibly the only size 10 in a sea of 6's. We had hair and make up done, and then went into the freezing studio where a fake house had been built. And there we stayed (bar an hour for lunch in a red double decker bus) for the next ten hours.
Megan Fox kinda strutted around like she owned the world, giving all the extras (I mean background artists) dirty looks, and as soon as shooting stopped for even 5 minutes she went back to her trailer. Simon Pegg hung around in between takes, in a dressing gown reading the last Harry Potter book (whilst pacing and saying things like, "Oh no! Its not looking good."). And making jokes with everyone. I love Simon Pegg. Even though he blocked me out of the shot a few times. Didn't he know who the real star was??
So that is the unglamourous truth. I don't think I'd do it again, but there's no way I would have missed it! If you want give it a try, try the agency that wanted to sign me (although I refused - I couldn't take it again) Mad Dog Casting.
Posted by Steph at 09:55

I really like the bits on brackets - I think that probably sets you apart from the snobby 'wannabe' types (hate that word though).
At least you had the opportunity, if only ones. Meeting Simon Pegg... I am jealous

oh wow. a great opportunity to learn, i suppose!

i love the name of your blog, btw. two of my favorite things!

girl i am not going to stop blogging lol ive jus been feeling lazy lately... =\ & i looove ur blog too

anyway being an extra huh?? thats cool in a way but i`m veryyy impatient so that would not work for me lol.

but yayyy ur comin to ny soon wohoo

It sounds like good money, though it definitely has it's downside...too bad about the slam on the sunnies! Quite a random statement...

i`ll pay more attention to that next time lol