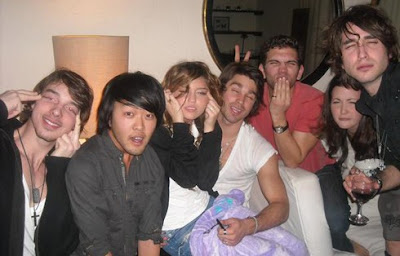 I may be a bit late on this post but you know how it is, London is always late and I had to read about this on a US news website. Stupid Miley Cyrus: Plain ignorance shown by her and all her friends above. And the joke is, she doesn't get why this is offensive....ARE YOU DUUUMMMBB!!! She is a foolish girl, after all the commotion that was caused over her semi-naked on the front cover of Vanity Fair, and those other 'saucy' pictures she took of herself (that some how got leaked to the Internet), you would think she would have some sense before risking another indecent photo fiasco. But obviously not, as this has surfaced. People say she is just a 'kid', she is 16! Just because she still works for Disney, it can not be used as an excuse for her stupid behaviour, shes old enough to date so she should have some sense. I really do not understand how her Asian male friend is just sitting there like this is all cool...oh and someone pointed out that he is making "Caucasian eyes" and why is he allowed to get away with it...erm, to me it looks like he just has bags under his eyes and is not intentionally making "Caucasian eyes."

Seeing this picture really angered me because I have not seen this 'hand-stretching-eyes' action for such a long time. Everyone knows it is offensive to Oriental people, as it takes the piss out of a feature that we all possess. It is what differentiates us from others and something we, as Asians should be taught to appreciate from a young age and to never feel ashamed of our 'unique' trait. As a child, being the only Chinese kid in a class of 30 or so obviously meant that I was some what picked on because of my eyes or my race. I am not going to lie, when I was very very young I did feel ashamed to be Oriental, at such a young age all you really want to do is fit in. Of course this is quite common, but you have to remember that you were being picked on by your peers who at the time are only 4 - 7 years old. They eventually (hopefully...) grow and learn, and more often than not, never go back to nit-picking at someones race. Obviously Miley (and co.) skipped a growing process in life as she is still carrying on this way.

Obviously now, at my tender age of 20, I am more happy in my skin, proud of my heritage and see my 'Oriental eyes' as something special rather than it being a flaw like I did many, many years ago. My eyes are not funny, nor is my skin tone and I sure as hell do not know any Oriental people who has buck teeth, the size of a hand, as you, mister in the background, so kindly demonstrate.

Oh and this is a justification of this photo:"this is America- you can do whatever the hell you want with your eyes."

WTF!! I have never read such nonsense in my life! This, along with the other crap that people commented in that article which basically says "Yeah, It is OK to pull this face when I see a Chinese Person." Whatever bitches, try that with me know, and the only hand -to-face action you will be getting is my backhand-to-your-face.

Sorry peoples, I had to get that out my system! On a higher note: 4 days until I depart this cold and wet land of Londoners to visit New York, New York!

It's obvious that they are making fun of Asians. Or making Asian faces. I know her friends and her probably meant it in good fun, but uh Miley, you're a public figure. You live in a fish bowl--people see what you do.

They're all intoxicated, including her!

I don't know why she denied making fun of Asians.
LOL. They make it seem just because
an Asian is in the picture it's okay.

I read about her dating that older guy and moving in with him not long ago....16!? Hello.

Haha. Love the rant though babe, gootta be done xxxx

I can't stand Miley Cyrus! I have no respect for that little girl who thinks she is the world!! I know how you feel about fitting "in" when you were younger. Kids are mean, I think...

You are so lucky living in London! (I wish I was living there, but hopefully I will in the near future..)

Miley Cyrus is...well Miley Cyrus. Her intelligence and conscience are obviously as lacking as her talent.
Hopefully she will just bugger off soon.
I really didn't get why her asian friend was just sitting there like it was fine either

Once I was on the Skytrain in Vancouver (it's our metro) and these three Asians were pulling their eyes wide open and pointing and laughing at me. But that's okay. Because they're making fun of a white girl. If I had done it to them on the skytrain I would have been mugged. Instead, people laughed.

Not supporting her actions whatsoever. But it goes both ways.

Oh, and I thought that guy in the back was just covering his mouth in the stereotypical cover-your-mouth-when-giggling kind of way.

Once again, I don't condone her actions whatsoever.

Miley Cyrus is an idiot. End of story. Haha! Have fun in NY, I'm so jealous being stuck down under in Australia. I'm not sure if or when I'll ever make it to the Big Apple..

great post.
send me a message when you get to ny. if there are any events taking place i'll let you know.

Trisch: I know it goes both ways and it is sad that someone would do that, and i don't think that is a stereotypical cover-your-mouth-when-giggling thing that fool is doing at the back because that action this is very common for people to take the piss out of asian's teeth. and i think it is pretty clear that his hand is covering his teeth and not his mouth no?

haha i liked reading this.

yeahhhhh i can also relate to ur child hood experiences. same here.

pretty stupid, i remember hearing another small news story about i think , a spanish soccer team?? that did the same thing.

I felt like that when I was a kid too. Things are definitely different now and I've learned to really appreciate all the things that make up our Chinese culture. I'm proud of it and these people who insist on making faces are just ignorant time wasters. Joke or not- Cyrus was an idiot to let these into the public domain.

great post, she needs to grow up before she plays grown up- disney need to sort it out! their stars are obviously too young. i'm just waiting for a jonas brother to get caught in a sex tape.

ahahaha!!! love the backhand comment and the bucktooth one!!!