LA Gear: Doin' it Since I was a Kid 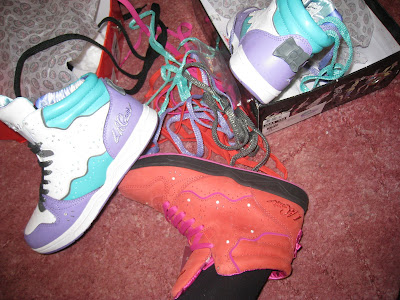 Last May I read ALOT about the re-release of the LA Gear Stardust Hi-Tops. Back when I was a kid, LA Gears were at the height of their popularity, Nike were nothing compared to the LA Gear 'Back-to-the-Future' light up kicks that every kid wanted (and every kid who didn't have them envied HARD!!) You know you I owned a pair, well, at least a fake pair anyway...

LA Gear came together with Amsterdam's Club Zonda to make the aptly named 'Fireball' pair in 2008, which are the orange and pink ones. I was super excited as it was supposed to be a European release, but did I any?? Not a single pair! I looked and waited but nothing, I would have never thought aged 20-what, I would want or even own a pair of LA Gears again. But these 'Fireballs' got me hard. And as you can see, I own these bad boys now!

On my usual rounds of the shops in London town, I went into a trainer store..and on the sale rack..there they were. Sitting loud and proud (and quite cheap). I honestly couldn't believe my eyes! After a whole year they just came into the store and hit the sale rack straight away, but I wasn't complaining! I picked the white/green/purple and the Fireball pairs and I was indecisive, as usual. The manager offered me a price that I really could not refuse, both pairs for £65, when the Fireballs were originally £90! And how could I not buy the white/green/purple pair when they came sealed in the original 1980s style box! I would have bought the box alone, it really is the icing on the cake: 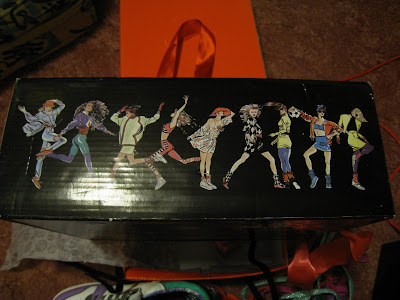 How sick can a shoebox get?! A box is just as important as the shoes no doubt.

And before you ask (because everyone does), no they do not light up.
Posted by Super Noodle Rach at 22:09

not sure if i like them..i like the colours of them..i don't remember la gears when i was little..i have reebok classics and platform kickers!!

lol i agree
i would've bought the box alone.
i love the white/green/purple ones
<3

They are SO SICK. Damn australia and not getting ANYTHING good here EVER.

Sick! I love the fireball, saw a girl selling it in my size. But didn't bought them, stupid me!!

We have them in almost every sneaker store here in Holland. Still like them thoug, especially the red ones!

love em..need em..ship them to me...
they are awesome
i envy those light up ones:)

That shoe box is definitely awesome. I would totally cut that out and hang it up on my wall. And speaking of trainers my boyfriend promised me a pair before I go to London. I can't wait!

i want these shoes just for the box xD

cute bloggg ! thanks for the comments :) xxxxx mwa

You know me....I only like the box lol but the colour of the trainers are cool I guess

haha, apart from the shoes, i totally love the box! x

Loving this conversation!! And the timing is perfect, as LA Gear & Sportie LA just released 89 pairs of the Stardust in the US! Yallz can read the full article here:
http://lagearnews.com/2009/05/stardust.html
and satisfy your need to grab one of these here and only here:
http://www.sportiela.com/lagear/stardust.html

i wore la gears too. that shoes was freakin' awesome. too bad i don't have it now.

You CAN get LA Gear now... if it's the Stardust you want, they're only available here:
http://www.sportiela.com/lagear/stardust.html

Not sure how many pairs are left of those, cause they only put out 90.

The rest of the relaunched and updated Unstoppable line is at: http://www.sportiela.com/lagear