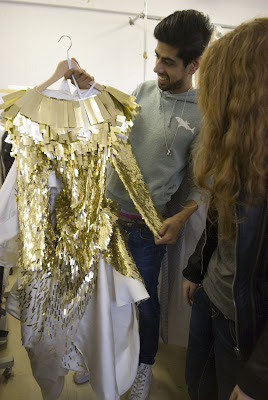 Manjit shows me his finale dress. All photos by Tilley Harris

Manjit Deu is sitting in the cramped studio on the fifth floor of the John Davies street campus of the London Collage of Fashion, among rails and rails of clothes that were shown at the LCF Postgraduate fashion show. The show where he won the Collection of the Year award, which says he is still in shock about.

Manjit, who grew up in Hounslow, west London where he still lives with his parents, was 15 when he realised he wanted to be a fashion designer. “It was through GCSE textiles, I knew I wanted to do something in the arts, but I didn’t know what... and through that I realised! And I just went along with it. It just kept on rolling...next course...next course...”

The next course was a BA in Fashion Design at Winchester University, after which he showed at Graduate Fashion Week where he was scouted for the MA Fashion Design and Technology course. After seeing his collection, he was approached by an LCF representative who offered him a place on the course.
Two years later, Manjit is finding it hard to accept that he has to leave.
“I’ve absolutely loved it [at LCF]. It’s the whole package. You’ve got the tutors, you've got the location, right here in the middle of everything. I'm really going to miss it, and I am finding it really hard to leave! Loads of people are finding it hard. Hence why the collections are still here! The tutors are like ‘go! go!’ And the students just don’t want to. It’s quite hard because the shows only just happened and now it’s like... you’ve got to move on. It’s scary.”

Contrary to what you may expect, Manjit says there is no secretiveness or competition among the 24 students on the MA course. He says “We all have tutorials together as a group. We have had since the beginning, through the middle and at the end of the design process. Plus it’s not a massive environment; the studio we work in is tiny. It would be stupid to hide your designs or keep things secret, because you’d just make enemies. You just get on with your work. And we're all friends so it’s ok.”

Well, winning the Collection of the Year has certainly given Manjit the best start of his friends. And he says, even if he didn’t win, showing at the V & A museum was still ‘amazing’ – “You couldn’t get a better venue really.” His clothes - inspired by the Art Deco architecture in South Beach, Miami – wowed an audience that was scattered with celebrities such as British designer Zandra Rhodes and model Jo Wood. But who the students were really excited about was Nicola Roberts; “We were like ‘Oh my God, Girls Aloud!”

His collection was awash with huge, brightly coloured, rectangular sequins from Bombay covering a paler, draping material which he says represented the “neon lights on the buildings glowing onto the pale soft colours of the buildings along the beach. I also wanted to investigate the interaction between sequins and the body and drapes. The inspiration for design ideas come from what you see and what you do. And you retrieve memories, and you just start thinking. For this collection, after I had been to Miami the ideas just fell into place.”

One of Manjit’s favourite clothing lines is fellow Arts London alumni John Galliano’s designs for Dior, but he states his biggest fashion influence as being the late Gianni Versace. “Even though he's dead...he’s the best! He made me love fashion.”

He also loves Versace’s sister, Donatella, despite her resemblance to an orange. “It’s Donatella! She is the muse of Versace. And to get hold of that company, while still being its muse, is amazing.” And who is Manjit’s muse? “I haven’t found her yet! But I know she's a beautiful, wealthy, Russian woman who likes to buy beautiful things.” 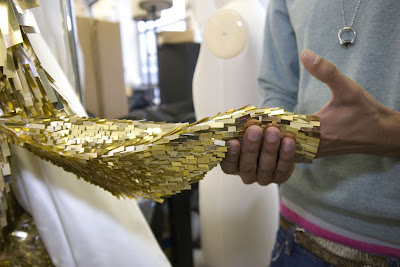 His biggest ambition, he says, is to have his own successful couture label. Who would he like to dress? “OK, this is really hard because I’ve got a large collection, and there are certain pieces in it which are more like performance pieces. So there are pieces in there for the more daring dressers like Kylie Minogue, Lady Gaga, and Roisin Murphy, but then there are also pieces in there for all the glamorous women like Cameron Diaz, Anne Hathaway and Charlize Theron. It’s just a vast range.”

After the show, he says, he has had a few job offers, press interviews, and has already had people – like Lady Gaga’s stylist – coming to see his collection.

He has also been starting his design for the OnlOff Reinvents Prize, which he also won along with three others. “OnlOff Reinvents is about sustainability. They’ve given us is the banners they’ve used in the past [which measures 35 metres], and we have to use the techniques we used in our collection, to make an outfit from it. So they will be different, for example, the colours will change. But it’ll be sustainable.” The recycled designs will go on display at OnOff's designer exhibition, which takes place in the Science Museum during London Fashion Week starting Friday 20 February.

Manjit says he is a believer in green living. “I think some people are more extreme than others, but I think if we all do our bit we can make a difference. I'm quite strict in the studio, regarding pattern cutting paper and what happens to it afterwards! I'm always taking it of the black bin and putting it in the green bin. That’s something we can easily do, that we have control over, just putting something in the right bin.”

And what are his views on one of the biggest issues in fashion, the size zero debate? “I haven’t really thought about it...I think as long as the models are healthy, they can be any size. My clothes are made with a specific body shape in mind though. On my grander dresses, you need a bum and boobs to make them look good. I don’t think I’ve ever had that intention, but I think it’s just been built into me, I’ve just naturally done it that way.”

Manjit says the best thing about British fashion is its fresh talent. “Britain has such raw talent. There's so much of it here, and it’s exciting, for everyone. That’s why London’s so popular, and that’s why everyone comes here.”

Remember his name, because Manjit Deu is proof enough of that.
Posted by Steph at 16:52

That one dress looks amazing. I totally could see Lady Gaga wearing it!