AND I'm going back there in a WEEK!!!!! If you often read our blog, you may remember this post where I spoke of two exciting things happening. This is the second thing that I did not want to jinx before I actually got confirmation! I am so excited (^_^) (^_^)! I have been waiting for this day since I came back from New York in July last year! and I have been in anticipation of this February trip since November when I was told it was happening. It was at my friend, Rachy's, 21st Birthday where her mother announced a trip for her and a friend to go to New York as a 21st bday present. And out of all the people in world, she chose me! This is my beautiful friend Rachy throwing peace signs, who is also an aspiring designer (she made the dress in the pic below) so watch this space and remember her face: 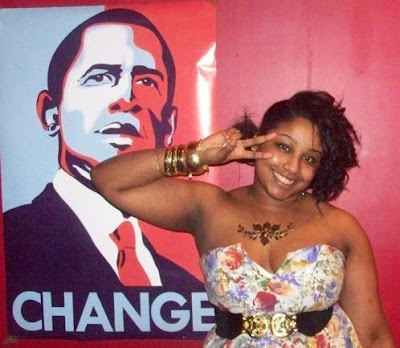 The New York air made both of us glow in a way which London has never done. I really do love NY! Isn't it odd how another country can just make you lose all the insecurities which you hold back home? For example, I would never walk out my house bare legged in London (and I am pretty sure Stephie wouldn't as well), whereas in NY it was not even a problem that crossed my mind. I was so conscious of bare legs that I brought 7 pairs of nylon tights with me, and believe me it was over-bearing hot out there.

Oh and hopefully, in one week's time, I will be doing some more of this:

...But not on such an extreme level. This was in Brooklyn and these bags were not your average carrier bags. They were actually the size of black bin bags!!! They were HUGEEE!!!!!


❤❤❤ Oh and if you are new to the blog be sure to follow our blog and show us some love❤! Comments will prove that you love Leopard Print and Lace too...❤❤❤
Posted by Super Noodle Rach at 22:36

I love your style funky

Fun, fun, fun outfits! I espeically like that printed dress and the wild sneakers! NYC is an awesome city.

I WANT THOSE SNEAKERS! Ahhhhh they must be so fun to wear!

how exciting! I wish I could go to NY!

listen, you better come back , cos this is getting ridiculous....

I really need your sneakers. The end.

you're so fucking lucky!
i love the colours of the outfit with stephanie.

NYC is my favorite place in the world! I live like a 4 hour drive away. But I do one day want to go to London. Btw I'm loving your outfits, as always.

i know wat u mean man!! in Niger or Moroc, there's a certain freedom u have, i didn't quite go to the extent of baring all my legs but i was fond of rolling my trousers up to my knee and baring arms in vests!!

U look like u got a lot a bargains in those bags, u better tell me where all these hot spots r!! x

girl u have too much swag to be livin in london!! you belong in the streets of NY like me ;]

i loove looove ur outfitsssss

Love all your New York outfits, I always find it so hard to get dressed out of a suitcase lol! I am so jelous of your second trip to New York, I went last Christmas with my Mum and fell totally in love with it, it's a great city, you'll havea great time! Char x

I love your style!! I have never been to London or NYC, but I am one day. Be sure of it! x

The dress in t harlem picture is amazing as are your kicks. I so need to get myself to new york asap! LOL
x

hi you dont knw me but i was looking at your blog and i really like it.
me and a couple of friends set up a blog ourselves for our clothing line coming early next year.our designs are different from everybody else due to all our crazy styles... we were wondering if u could please help us and subscribe to our blog www.svsclothing.blogspot.com. also you can find us on youtube under SVSClothing. we were also wonderng if you could help us adverise our blog on our blog please as it would mean alot to us.

i LOVE the sneakers!

i'd tell you i loved you but i think you'd think i was wierd.

i like your style (is the dress from your harlem pic h&m?), specially the nautical skirt in the first picture.

you have the most innovative style-love it mamas! YOU GO GIRL!

Oh i have that navy H&M skirt in red! Great pictures!

haha yes I saw 2 films, only because I have an unlimited card at the cinema (:
I loved New York when I went last year.
Ps. I love your nikes!
x

This is so exciting! Make sure to be cheesy and buy an I heart NY t-shirt.
Also I only just realized what insanely cool style you have... you mix everything up so well. Nice one (:

I know how lame it is commenting on the same post twice but I had two things to say:
1. My friend has just told me she is going to Paris next week, and she is going to buy me an I heart Paris tee. Kerching.
2. Jodi Picoult! I read Nineteen Minutes (at least I think that is the name... it was a while ago) and it was dead good.

I love NY too. I want to go back, you are very lucky! Love those Nike low tops and that brightly coloured dress- a girl after my own heart!
Added you to my blogroll :)

oh my goodness, new york is lovely even though i've never been there.
you're a lucky lady!

your outfits are AMAZING, i must say <3

Looks like you had fun!! I really love your outfit!! :)

i would love to visit NYC one day, i'd do nothing but shopping! ok maybe a little sight seeing too, wishing the pound isn't so weak!

I am going to San Fran, NYC, and London this summer. I must say,I'm pretty excited. Though, I'm not entirely sure what i'll do, or what to do with myself...

i am so digging ur funky style! love how you wear colors and put different prints together.

HELLO.
thank you so much for your comment on my blog (: it made me smile and that was exactly what i needed at the time.. so thanks (:
i really really really REALLY love your style. i'm not even saying this to be nice, because it's not nice; it's cheesy. but i actually DO love your style. wah.. the shoes, the dress, the disney shirt.. the picture alongside the water.....

SIGH.
you make me jealous ):

keep it up though! amazing inspiration right there!