I forgot to mention the cushion I made. I bought a (fake) Dragonball Z kids shirt (£3-hence why it is fake!) at the comic convention with the intention of turning it into a vest. Hoping no-one, aka hardcore Dragonball Z fans, would notice the blue stars which are supposed to be orange and the blue fin of the dragon...ahh the shame. I got a bit scissor happy and ruined it. So I made it into a cushion instead for Lovely Superdan...who is a hard core fan...but doesn't mind the fake-ness as I had made it, I'm quite proud of it although it is so simple. I even restitched the top label onto the outside to make it more 'authentic' (^_^) (though it got cut out in the snappy snap): 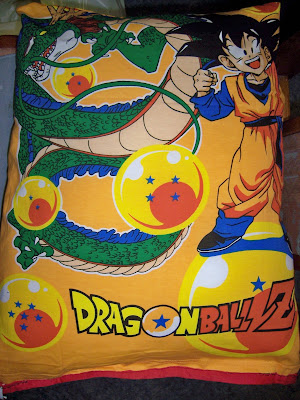 Hey! Thanks for the comment lol, I agree that bumbags can be cool but not in the way that tourists wear them, it's like a beacon to theives "I'm not from here! I'm carrying a lot of cash!". I am glad I'm not the only one who has these blonde moments though...