Without sounding like a stupid little teenage girl who has a mad crush: **SCCRRRREEAAAAAMMM**.


I SERIOUSLY CANNOT WAIT FOR "TAKERS" TO BE RELEASED. September. Two more months. Just two more months. The girls and I have been on this mad hype for months ever since we found out about the movie! The cast are too too much for my eyes - as it is for all the other females, I'm sure - ahem, Hood and Proper. They seriously could not have picked a better cast, it is as if Mr. Cast man went and picked them straight from my list of "Hotties to put in a movie once I become a film director" (one of my many life ambitions. Didn't you know? Well, obviously not an established one, directing a 5 minute home movie with friends will do me fine). Who would have ever thought T.I, PAUL WALKER (back to the way he looked in The Fast and The Furious), JAY HERNANDEZ (welcome back, its been too long) and HAYDEN CHRISTENDSEN would all be in a movie together?

I know they are not gangster enough, but, I might have given a brief cameo to Robert Pattison and James Franco just for good measure: you know that little extra helping of sugar to my pie, the whipped cream to my sweet strawberries, the sprinkle of chocolate on my Mocha, that splash of soy sauce on my noodle soup... Oh, lets not forget Josh Hartnett. Yes, most definitely *swwwooonnn*. And, yeah, taken Chris Breezy OUT (blleeeggghhh).

This movie is one for the ladies. I don't care if it is the shittest gangster "crime thriller" movie ever made, it will be watched in the cinema and it will be bought on DVD. The legit £14.99 shit with extra scenes, not the pirate one.

I will even go into HMV, give over a crisp £5 note and buy the poster. Not for the hotness, just for pure laughter. How fucking funny do they all look here: 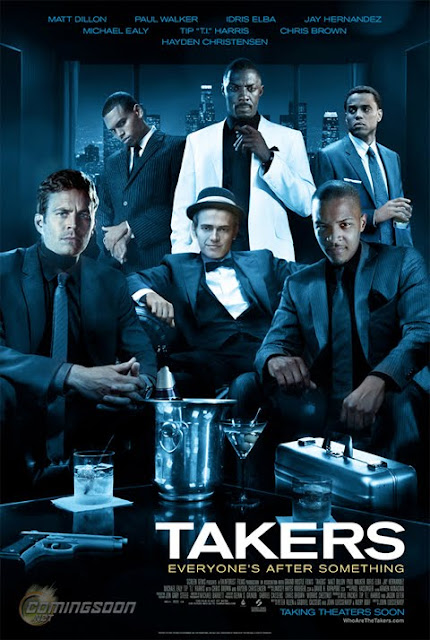 AHAHHAHA it is so BAIT, Can you feel that Gangster vibe exuding from the poster? Why do they all look like their heads have been badly photoshopped onto their suited and booted bodies?
Why does Hayden look so gay? Why is he trying to seduce and entice the audience with his eyes, more importantly why is it not seducing OR enticing?!

Seriously, is Mr. Brezzy now part of the mandem and making gun shot fingers?! That is TOO MUCH! BAHAHAHHAHAHAHA!!!!!!

There must be an explaination for this turtle neck.
Posted by Super Noodle Rach at 17:36

Ahahahah the poster is jokes! I will definately be checking this out when it's out, even if it's only to drool over T.I and Hayden...
<3

i was stoked since the day i saw this poster hanging in the theaters!!!

hahahaha!! i agree the seducing eyes, the turtle neck and the gun fingers... its alot. looooool